In terms of Donaldson’s exhibition of paintings at Ace Art “Art Imitating Life Imitating Art” I visited the exhibition three times and documented his work for notes, I realized that so far my critical distance essay “The Post-Bolshevic” was primarily written about the Student Bolshevic Collective but I did not go into great length discussing Donaldson’s work in the show. 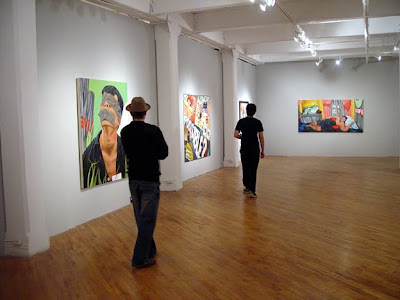 Due to my emphasis on the Bolshevics I felt compelled to meet with him for an interview that could potentially be posted on line in addition to the critical distance essay. After telling Donaldson this he felt it was important for me to meet with him and John White for a conversation. 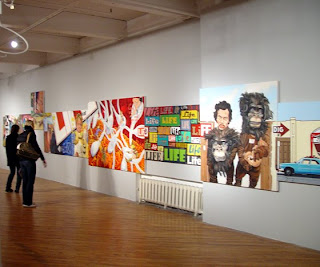 Here are some non-linear excerpts and fragments from that conversation on Sat Dec 22 in Donaldson and White’s Winnipeg studio:

DB (Derek Brueckner): So describe to me some of the processes about the Bolshevics in relation to Painting.

DD (Dan Donaldson): I would categorize them as unconventional and nonconformist processes that are also experimental.

DB: Were there any teachers that come to mind for either of you?

JW: I liked Alex Brunning’s approach to teaching. He was always very clear in terms of when something worked or when nothing was happening in my work. He was brutally direct and never minced words. As good a teacher as Alex was, I still do not think passion at any art school can be taught, the student has the passion or not.

DB: So explain to me a bit about who the Student Bolshevics were as a collective.

DB: Was there anyone else involved?

DD: There were many people that had brief associations to the Bolshevics.

Unfortunately some people completely made up connections to the Bolshevics or exaggerated their connections. Some would make up shows that were not really happening which would be attributed to the Bolshevics but would not have anything to do with us. So certain people were saying they were part of collective when they were not. They certainly would have been welcomed if they just asked to participate and offered to contribute in some way such as bringing some beer.

The Bolshevics were really a non-group that was an impermanent gallery space that would temporarily pop up at various spaces and would show work, not unlike the Dadaists and their temporal activities and spaces.

DB: Who keeps in touch from the Bolshevics?

DD: Well Doug Harvey, Mike Jacobson and Mike Waterman collectively work together on the The Mannlicher Carcano Radio Hour can be heard live most every Saturday 2 Winnipeg time at www.cfru.ca.

DB: I remember a couple of the Bolshevic shows, how did it all work in terms of curating and installation?

JW: First come first serve, for some people it was 5 minutes before the opening and they would hang the work wet or dry as long as there was space.

DB: So in some ways that was the curatorial thesis of the shows?

JW: Yes, there was a loose theme to each show and people either chose to follow the theme or not. It really became about whether there was enough space but the work still had to be good.

DD: The late Walter Lewyc would advertise the shows and we would always end up with a good crowd of people attending.

DB: So getting to your work Dan, I noticed in the generously sized reclining female figure… 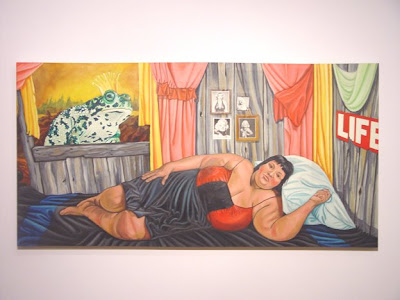 
JW: You mean the Brazilian Prostitute [Bordello Fantasy] painting where Dan was originally going to use sumo wrestlers, which ended up being the frog.

DD: The frog just came from a Life book, I had never painted a frog and the image just interested me. The crown just came to me.

DB: Oh ok yes the Brazilian Prostitute, well besides for me the reference to Manet’s Olympia that work of yours is a painting with more control than the other paintings in the show.

DD: The preciseness of the painting style and brushwork began with doing the drapery and it just continued into the rest of the painting. Overall my painting does not have one style.

DB: So what are the early influences of your approaches to Painting?

DD: In High school I had a vocational commercial art training, which was a strong influence. I think that has always influenced me in terms of how to organize shape and colour. Colour Field painting also plays a part in combination to various images in my work.

DB: For me Robert Rauschenberg and James Rosenquist show up as definite references.

DD: Yes them and Jasper Johns as well and I also tried to paint like Pollock during my early years at Art School.

JW: Yeah there was also the influence of early Pollock Jungian type paintings.

DB: So all of these artists influenced or anticipated the free association of the later work at the Ace show.

DD: Yes sure in some ways.

DB: So what do you think about writing that discusses painting?

DD: Writing about artwork is hard…yeah it is just better to make it.

JW: Painting is a visual medium and of course it is hard to write about it. A person can write the world blue. But can they see it like a painter sees blue?


(The conversation then breaks down into momentary chaos and White alludes to a quote by Ad Reinhardt "Sculpture? - something you back into while looking at painting." Then there were some free association sentences about pickled eggs and Amself Kiefer. Donaldson then brings back some order to the conversation with another question.)

DD: Do you know about the Cappy Dick show?

DB: Was that a Bolshevic show?

DD: No that was a show that John and I did.

DB: I suspect that the three of us agree that art practice outside of painting is important and meaningful but I think we also agree that the whole notion of painting as dead is nonsense. What can you offer in terms of the paradigm of painting?

DD: Painting is a solitary process. You have to rely on intuition during the process, the painting starts to tell you what to do. While in the moment of the painting process it is the hunt for good painting and it is the adding and subtracting process of paint and other materials that really matters. The end product in many ways is secondary.

JW: Then you get a 1 x 2 from Home Depot paint it in black…that makes a great frame to finish things off.

DD: So is there anything you would like to know about me?

DB: On one of the walls at Ace there is the large work where various sized canvases are all unevenly joined as modules to construct a whole installation? What is your reasoning behind that presentation format?

DD: That large piece is continuum at times involving fun, humor, chaos, and people and treating each other viciously, but all of it and the other paintings are primarily about the free association of images. Sometimes it is about taking an image and simply and arbitrarily re-contextualizing it.

DB: So then the image was always there and you just re-used it?

DD: Art is Life, Life is Art and so on….The work is rooted in Bolshevic’s ideas about making art: idea and process is more important than the object making.
Free association can also be a play on of words including the phrase Art is Life, Life is Art as being a cliché. Life and Art have many definitions that become character with lives of their own. Everything is so uncertain just as in the beginning of the painting process and of life itself.

DB: Your saying then that this large work and the entire show’s theme in general relates to the idea that the exhibition has no beginning or end?

DD: Yes the work in the show began over 15 years ago and then stopped because I had a family and then I started it up again. The work and the large piece will continue until something in my life stops me from working again or when my life is over. Art should not be a chore

DB: What are your beliefs in relation to religion?

DD: I was raised a Scottish Catholic and am now an atheist.

DB: Overall is there anything specific that you want the viewer to get from your work?

DD: My hope is for the viewer to have an experience that has an immediate visual impact. The exhibition and my work in general is something that I hope consumes and or will overwhelm the audience in a positive way. I want people to have same reaction and feelings when I am making the work. So very gratifying when people get that experience from the work.

JW: The work is comparable to a Visual Buffet

DD: I hope the Bolshevic’s ideas will keep on festering.
3 comments:

Visual Mathematics and Formalism 2013 to Present